Successful chromosome segregation requires accurate spatial and temporal coordination of various events: mitotic spindle formation, chromosome attachment to the spindle, equal partitioning of chromosomes into daughter cells and cell division through cytokinesis. This coordination is achieved through regulation of the activity of key proteins, in which post-translational modifications (PTMs) play a pivotal role. PTMs include phosphorylation, ubiquitination, and the more recently described conjugation with small ubiquitin-like modifier (SUMO). As well as understanding more about how these modifications affect the later stages of mitosis, we are particularly interested in studying the molecular mechanism controlling mitotic spindle dynamics. The mitotic spindle is a complex cellular machinery, whose building blocks are three different types of microtubules: (i) interpolar, which control spindle elongation; (ii) kinetochore, which link and guide chromosome movement to the poles and (iii) astral, which contact the cellular cortex and guide nuclear positioning. Besides microtubules, a functional mitotic spindle requires the activity of Microtubules Associated Proteins (MAPs) and motor proteins.

Adaptation to the DNA damage checkpoint

The DNA damage checkpoint is a surveillance mechanism evolved to preserve genome integrity in response to DNA damaging agents. It senses DNA insults and halts the cell cycle providing time and conditions to repair the lesion(s). If the damage is not repaired, cells either undergo a programmed cell death or override the checkpoint reentering the cell cycle with damaged DNA. This process, known as adaptation, represents an opportunity for cells to repair the damage in the following cell cycle and survive. As checkpoint adaptation could promote genomic instability, it was considered unlikely to occur in multicellular organisms. We now know that this phenomenon exists also in humans, and it is an important driver of tumorigenesis. It has been observed that after treatment with genotoxic agents few cancer cells manage to enter mitosis with faulty DNA. Mitosis in the presence of damage can lead to translocation, deletions or other types of mutagenic events that have been reported in tumorigenesis, thus highlighting how low levels of DNA damage could have substantial protumorigenic effects and ultimately contribute to development of resistance to therapy. By using budding yeast we plan to gain insights into the molecular mechanisms by which the cell cycle machinery impacts on the DNA damage checkpoint and by which damaged cells that evaded the DNA checkpoint undergo mitosis. The remarkable conservation of the checkpoint pathways between yeast and humans will make it possible to point to mechanisms that regulate the checkpoint in normal and cancer cells. The basic discoveries could then be translated into clinical practice and serve as a potent adjuvant therapy when combined with DNA-damaging agents. 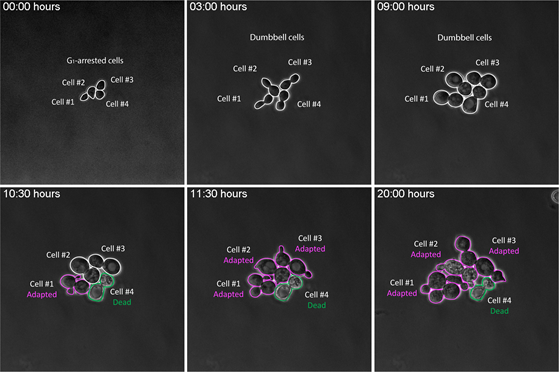